Are you gonna give us any of that chicken? 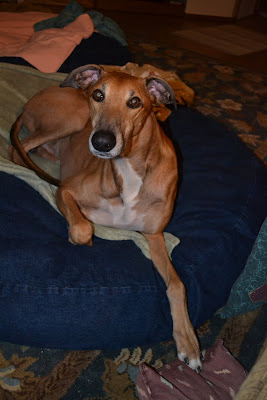 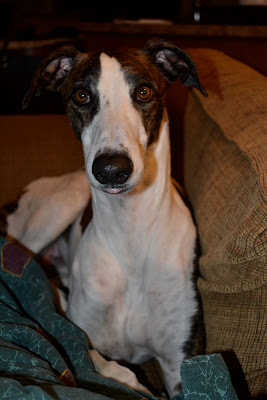 We don't need no stinkin' chicken! 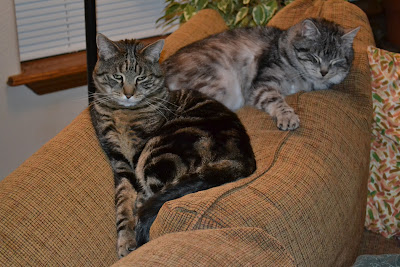 Song and Sue at Graceful Greyhounds were nice enough to pass on this award us.  Thanks!  I'm supposed to pass this on to eight other blogs.  So, here it goes.

Through the Barn Door

This is Lauren (and Greyhounds)

Treasure What You Have 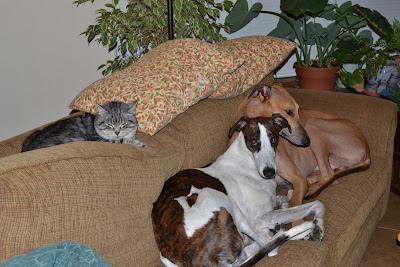 I hope you enjoy visiting these blogs.  We sure do!
Posted by Hiking Hounds at 8:53 PM 10 comments:

Things that Moan and Groan in the Night 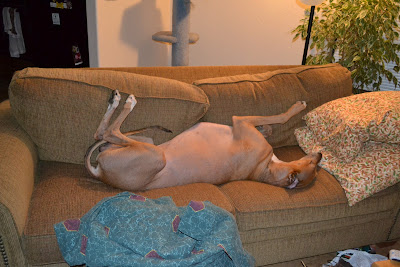 I thought that title would get your attention.  :-)  But no... I'm talking about the beloved Zephyr.  Since last summer sometimes Zephyr moans and groans during his sleep, mostly during the night when I'm trying to sleep.  He didn't do this before he got encephalitis, or a least not to this extent.  I thought I would describe this and then maybe some of you could tell me if any of your dogs do a similar thing.

First let me say that I really don't think it's dreaming.  It seems to only happen when he moves while sleeping, like when he rolls over, stretches out, any type of body adjustment.  A lot of the time it sounds to me like he is uncomfortable or somehow frustrated, sometimes it just sounds like a normal groan.  Sometimes it is so loud that it wakes me up, and that's when the worrying can set in.  You see, in the couple days that Zephyr was sick before we made the mad dash to the neurology center in Phoenix and I found out that he had encephalitis, he was groaning when he tried to sleep because his head hurt.  In addition, I was alerted to everyone of Zephyr's seizures because each began with a very loud kind of groan/yell.

Hence, I have spent many sleepless nights worrying that he is groaning because the encephalitis is coming back.  Luckily everyone of those nights has been greeted with a happy boy who vigorously shakes his head with no pain and goes about wagging his tail.  I try to remind myself of this during the sleepless nights, but there is no logic at 2:30 in the morning.  Oh yes, and there are the few times that I've thought he was having a seizure, thrown the covers off, flew out of bed only to scare the crap out of the animals, sending them flying up and standing there looking at me as if to say "What The Hell Are You Doing, Crazy Lady!!!" 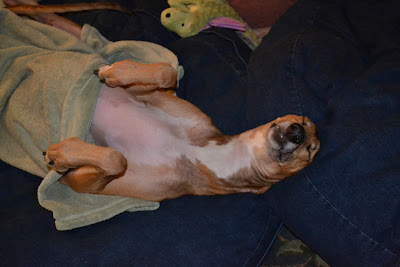 I have a few ideas for why he might be doing this.  I first noticed it in July when I reduced his prednisone and I noticed it happen in December and January when I reduced it.  Even though I did small reductions, 1.25mg, spaced at least 2 weeks apart I think for the first one or two nights it made him achy and maybe that's why he would groan.  For a week now he's only been taking the 5mg of prednisone in the morning.  A lot of the time it does sound like a groan from being achy.  And, I read that when people reduce prednisone it can make them feel not so great and achy because the body has to get used to going back to producing it's own cortisone.  The night after he had his first big run in the snow in the forest he was very moany and groany.  So I figured that was from the fact that it's a lot more work for him to run in pretty deep snow and he was probably stiff and achy from that.  He did seem a little stiff in the morning after that.  But what about the nights that don't follow a prednisone reduction or heavy playing or running?  And what about the nights that he doesn't moan and groan?  Are some dogs just moany and groany when they sleep?  Zephyr is generally a pretty vocally expressive guy, he can really talk it up and tell you what he thinks.  Could the seizure med. do funny things?  Any one have experiences like this or any ideas?
Posted by Hiking Hounds at 1:51 PM 13 comments:

Last weekend I took Astro to a Rally obedience run through in Phoenix.  Rally is a more casual type of obedience where you and your dog walk through a course and perform different things when you reach the signs on the course.  Your allowed to talk to and encourage your dog throughout the course.  You start off with 100 points and points are deducted for mistakes depending on how severe they are.  When you start off at novice level your dog is on leash.  At the advanced and excellent levels your dog is off leash healing with you.

We've been practicing a lot at home and in a few outdoor locations, but I wanted him to get some practice in a new location with distractions.  He can still get pretty goofy when we go to practice things in new locations.  This was an indoor facility with new sights, sounds, and smells.  On the other side of the room an Obedience run through was going on.  We did the course twice and the second time I was able to get someone to video us.  At the beginning of the video there is a guy who I'm just going to say is ignorant and is using the old style of popping the leash to try to get his dogs attention.  It's annoying to say the least.


I thought Astro did a great job being in a totally new location.  We weren't perfect but his focus was great and he was really working with me.  I love how his little tail was wagging the whole time!  I started over because his sit was off to the side and figured I'd take advantage of being able to practice it again.  We hit the cone which was kind of my fault, I didn't leave enough room for Astro.  My friend pointed out that sometimes I move my had with the leash behind and that can cause the leash to be tight even though Astro's not pulling.  I also think I need to leave the leash a little longer to make sure it doesn't get tight.  I'm always worried that it will get in the way and wrapped up.  But those are little things that can be worked on.  Overall I am thrilled with how well he did!

A Birthday in Pictures

Zephyr had a great 5th birthday.  Here are some of the highlights. 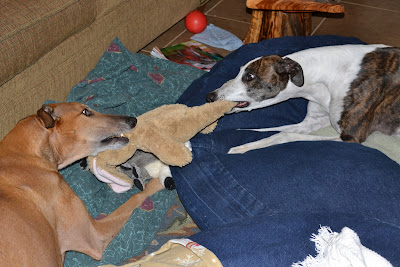 It's my birthday, this is my bunny! 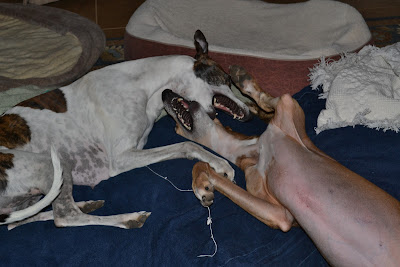 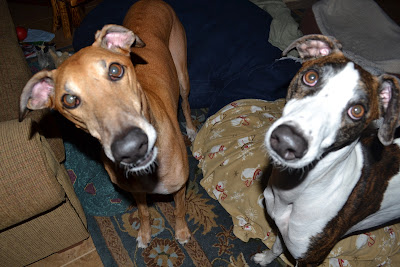 You're going to make what for my birthday?! 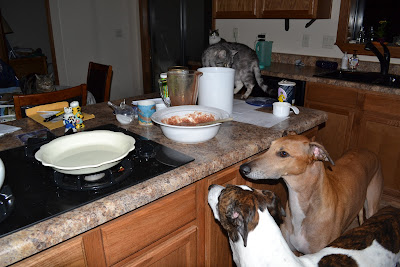 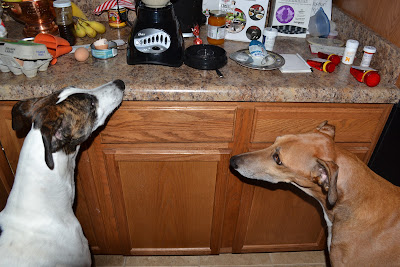 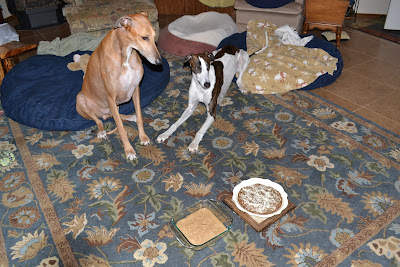 Why is she torturing us? 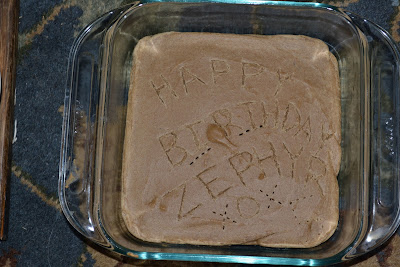 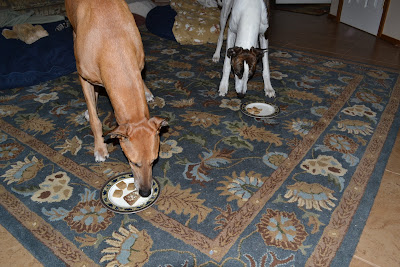 By the time the next picture was snapped the plates were empty. 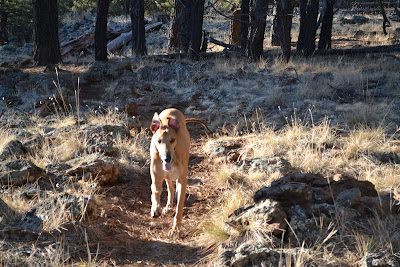 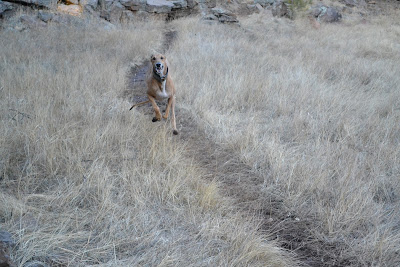 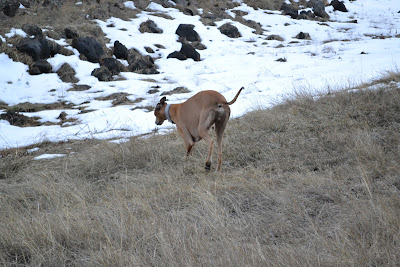 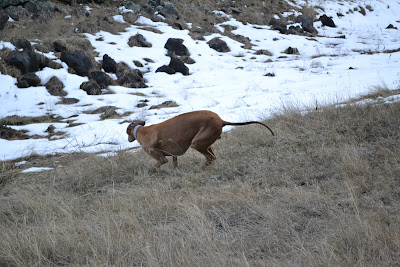 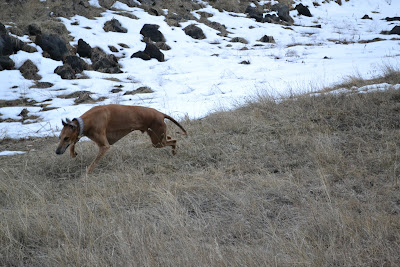 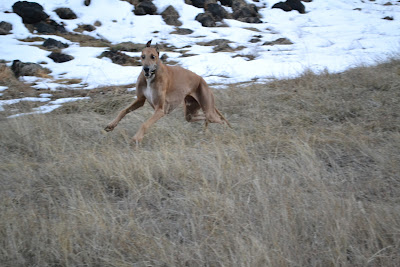 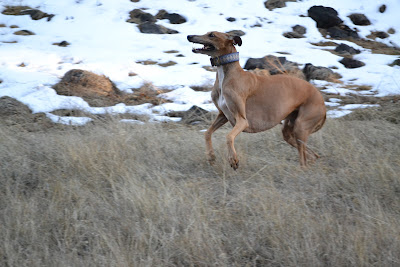 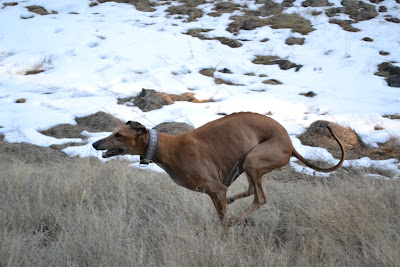 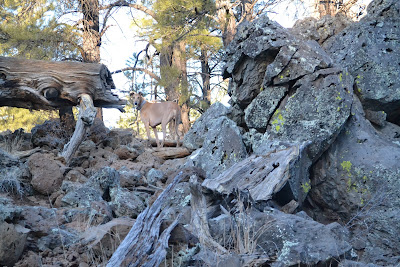 Thanks for all the nice birthday wishes.  It was a busy weekend and a grand time was had by all. 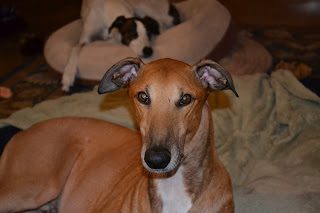 I don't think I can express just how happy I am that Zephyr is celebrating his 5th birthday today!  Almost a year ago he came down with encephalitis and I came very close to loosing him.  Thanks to some excellent veterinarians and Zephyr's strong will, my boy is doing great! 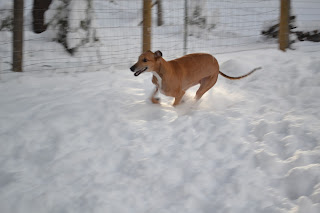 We have lots of fun planned for Zephyr over the next few days that I'll share with you when it's over.

If all goes well Zephyr will be finished with his chemo treatments (his procarbazine was reduced to twice a week Dec. 1) and only taking 5mg of prednisone once a day (down from twice a day) within two weeks.  I have to admit I'm still pretty nervous about what will happen as we take him off the meds., but very happy about it at the same time. 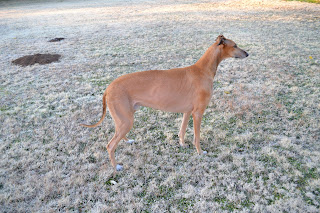 Over the past few months he has really flourished and gotten back in to shape.  With his four CCNU treatments and the warm summer temperatures he lost a lot of muscle tone, lost a lot of fur, and gained a lot of weight (to about 100 lbs.).  He's looking quite svelte now, weighing in at a little less than 92 lbs. this week, fur slowly filling in, and zipping and bouncing around like a young pup. 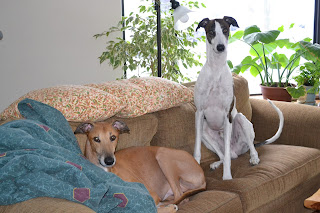 Happy Birthday baby boy!  I love you so much!!

Can't You Hear Them Laughing? 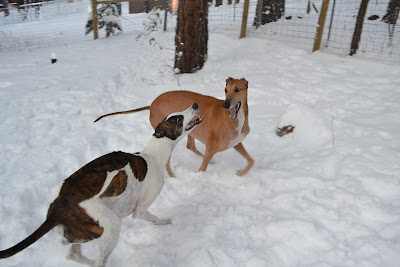