We have had snow all week long! It started Monday night and hasn't stopped. With Monday being a holiday and the storm, there has been no school all week. That leaves plenty of free time to shovel snow. Today was the most so far, at least a foot overnight and it continued. The worst thing is when the plow comes by and piles a 3ft x 4ft heavy pile of snow across your driveway. Today Ernie and I spent about 4 hours shoveling, some areas more than once. This included Ernie shoveling off our garage roof because it was getting really deep and we're supposed to get more snow. The garage doesn't get much sun and no heat from in the house. This afternoon the snow turned to rain which made every thing very soggy and snow very heavy. We have had about 3ft of snow so far and are supposed to get 2ft more by Saturday morning. There is flooding in the state where they don't get snow. Lure coursing was canceled this weekend because a bridge to the area washed out. Now Arizona is under a state of emergency, pretty crazy. Zephyr and Astro love the snow of course, and besides being very tired from shoveling it, I love snow too. We stocked up on supplies last weekend, it's important to have things like pie on hand when your stuck home shoveling snow! Pictures and more to come soon. 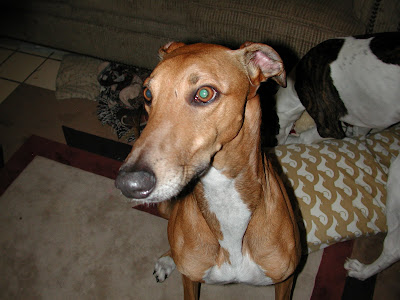 Wednesday, January 6, was Zephyr's 3rd birthday! It's hard to believe he is 3 years old, time passes too fast. 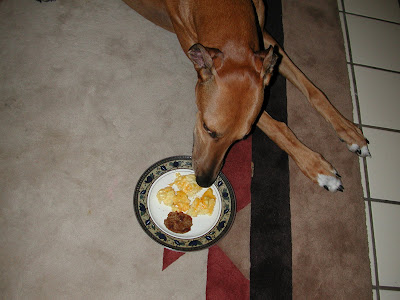 This year we celebrated with a special breakfast dinner of scrambled eggs with cheese and sausage. Yummy! Zephyr and Astro really loved it. 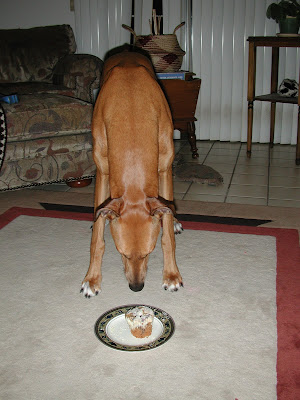 For dessert there were blueberry muffins with a yummy topping. Last year we had a doggy birthday cake which was really cool looking but Zephyr didn't really like it. 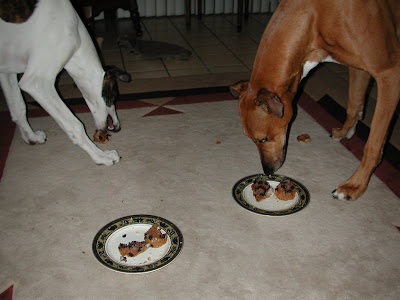 This year the muffins were a big hit! 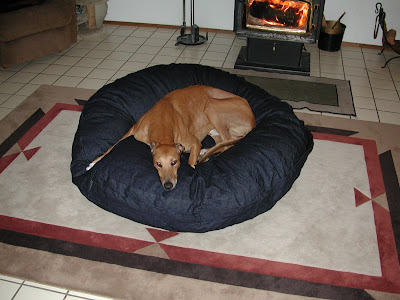 Now, to the gifts. Zephyr got this awesome dog bed from Victoria Peak.
Extremely Cozy! Zephyr actually already had one of these dog beds but in a smaller size. When I decided it was time to get one for Astro I decided to get the super size for Zephyr and let Astro have the smaller one. Even though it's a "hand me down" Astro is very happy too. 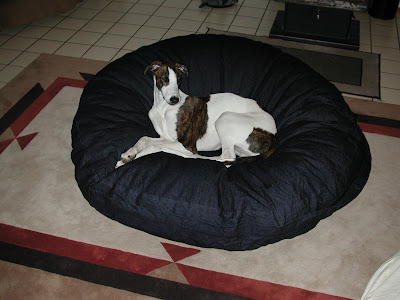 Zephyr did let his little brother try out his new bed. 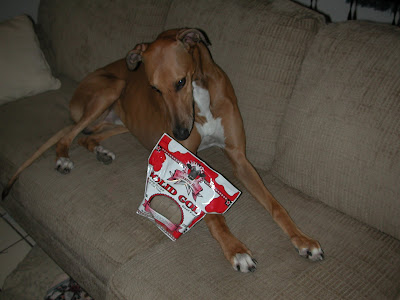 Zephyr also got some Buckaroo Beef treats. These were a huge success too, everyone loved them! 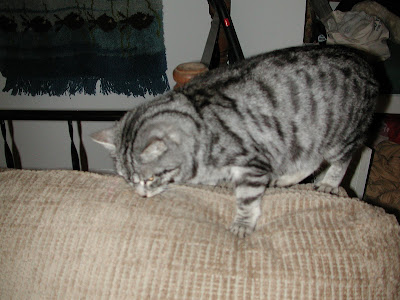 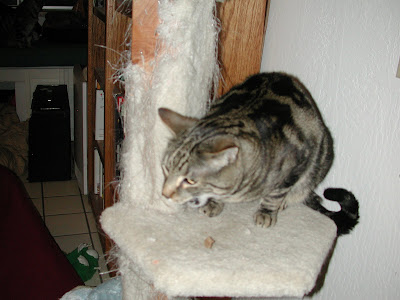 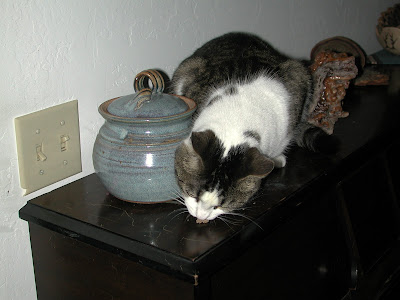 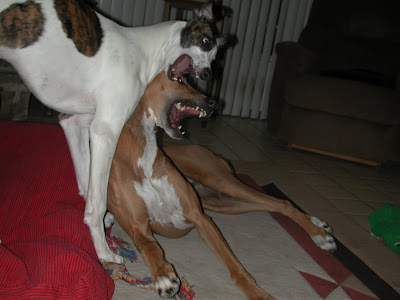 Of course the party ended with a rowdy play session.
Posted by Hiking Hounds at 8:45 PM 5 comments: 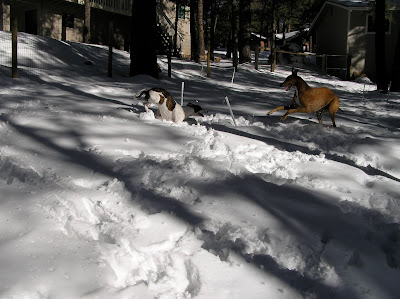 We've had a good winter so far with two big snow storms. Zephyr and Astro are having lots of fun playing in all the snow. Astro has really started to like zooming around the backyard like Zephyr. He's even following the same "race tracks" that Zephyr has made. He also likes diving between my legs and generally running in to me while they are playing, which keeps me on my toes so to speak. 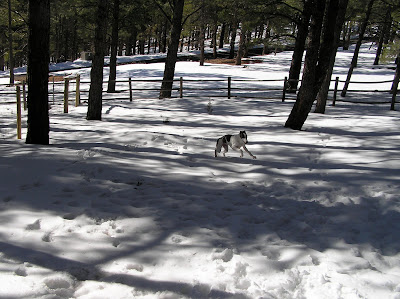 Astro is about 5 1/2 months old and is growing up healthy and fast. He weighs about 50 pounds now and is about 24 inches at his shoulders. He's almost the exact weight and height as Zephyr was at this age, maybe a pound or so less and a tiny bit shorter. Yes, we keep/kept charts and mark heights on rulers for the two of them. :-) The funny thing is to us he seems smaller than we remember Zephyr being at this age. I'm guessing that's just because we have a grown up Zephyr to compare him with now. At the same time I think Astro seems to carry a little more "baby fat" than we remember Zephyr having. We once overheard someone say about Zephyr "that dog is way underweight!". He wasn't, but I still felt kind of bad. Anyway, it's really fun watching him grow and seeing the differences between the two boys. 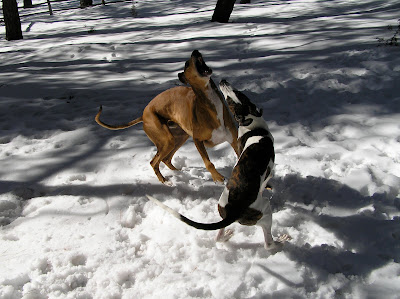 These two are extremely rowdy players. Astro is very vocal when he plays so sometimes it can sound like a vicious throw-down is happening. 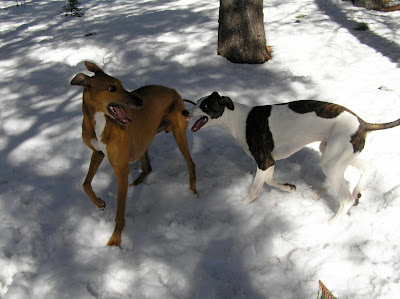 Astro almost always pulls his lips up to show his teeth when they are playing, where as Zephyr keeps his lips relaxed and down. Since I know he's just playing, I think it looks pretty goofy. Others might think he's out for blood. :-) I am wondering if Astro will be one of the greyhounds that give the goofy smile with the lips pulled up? I love it when they do that. 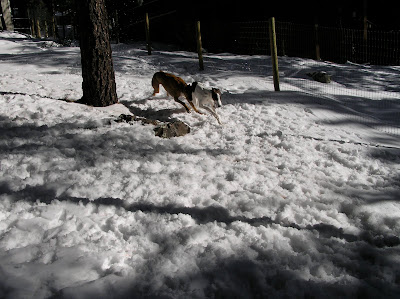 Zephyr and Astro are becoming quite the pair. I think Zephyr has become a bit more self confident since having Astro. Zephyr always hated being left in the car while I ran errands, etc. He still doesn't like it but seems much more relaxed now that Astro is there with him. Astro seems to like to sit and look out the windows at everything. 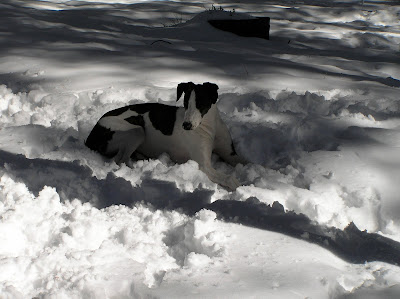 A short break to eat snow in between play. Astro is getting a lot of freckles (not sure what the official name is) as he grows. He's got lots on his muzzle and they are showing up on his body. Some are on the skin under his white fur but, some are showing up as dark fur too. They are very cute!

Tomorrow I have to go back to work after the winter break. I'm not excited about having to leave them in the morning. :-(
Posted by Hiking Hounds at 3:59 PM 1 comment: