Well I am finally updating the blog with this winter's activities. It's been a really long time since I have posted anything, but we have all been good with a few minor exceptions. In November Zephyr won a best of breed in lure coursing against 4 other greyhounds, so he has his 2 majors that he needs toward his field championship. We have some trials coming up that should be great fun.

In December Zephyr had a ruff spell. Right before Christmas he got in to a fight with a pit bull. Our neighbors are seasonal residents and let some of their family use the house occasionally. Well the son and family were up and they let their pit bull and corgi out off leash. They do not have an enclosed yard. I'll make a long scary story short and tell you that Zephyr was generally okay after the fight. We had walked out the front door to go on a walk and when I got to the road I saw that these dogs were out. The corgi, Bomber, came up to Zephyr and then got scared because he was overwhelmed by his size/exuberance. I was just trying to continue walking but then I saw the pit bull, Blue, coming. He is very protective of Bomber. Zephyr is also protective of his home area and could probably sense my fear. I tried to yell at Blue to keep him away but it didn't work. So when blue ran up to Zephyr they just started fighting. It was not good, pit bulls really do go right for the neck. Zephyr did fight back though. I was yelling for help and trying to break them up. Thankfully Zephyr pulled out of his collar and was then able to run away. So then I got to watch my un-collared greyhound running down the road with a pit bull chasing him while I chased them both. Luckily my other neighbor was already coming to help and kept the two separated and there was no traffic. Once we got Zephyr, my neighbor and I were holding him and looked down and saw that my legs were just vibrating in fear. It was all very scary. Zephyr was generally okay, only some small wounds and his feet got scrapped up, but a few of the wounds did leave little scars. =( After talking to the owners of the others I found out Zephyr bit Blue on the forehead and his feet were torn up too. I of course emphasized, in a nice way, that they have to keep their dogs confined or on leash, etc. Actually, Ernie said I was too nice and I probably was. Since this I have been a little nervous when going for walks, and twice we have been charged by off leash dogs in the neighborhood. I think I am going to have to start calling animal control on these people.

Another bummer was that after Christmas Zephyr slipped when coming in from the back yard and really cut the side of one of his back toes on the curved metal piece at the bottom of the door. We went to the vet and they did not want to stitch it up because although it was big most of it did not go all the way through the skin. Well it took forever to heal and stop bleeding when he bumped it, etc. Like over a month. I kept it covered and that helped. I think it took so long because the layers of skin had to regrow. It's almost 100% healed now.

Between all of this we have been having some fun in the snow and enjoying winter fires. It's been another good winter here with lots of snow and I've been able to stay home some days because school was canceled. Here are the pictures of what we've been up to the past few months. 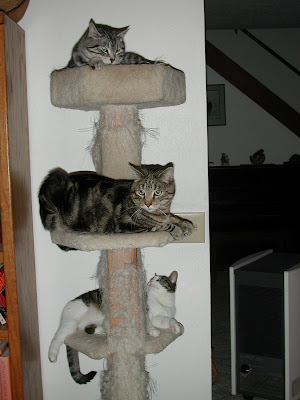 Finally introducing our three cats, from top to bottom, Pablo, Riley, and Annie! 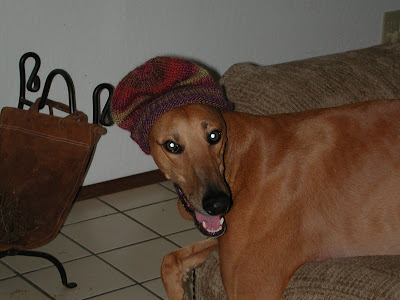 I learned how to knit after Thanksgiving. Zephyr is modeling my first hat. 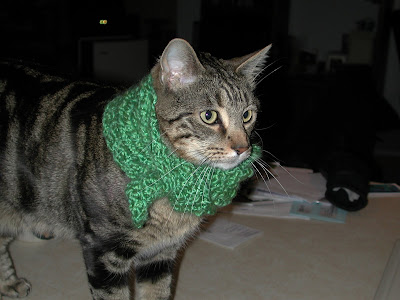 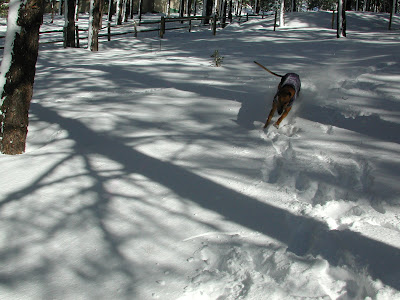 There has been plenty of snow to have fun in and frolic. 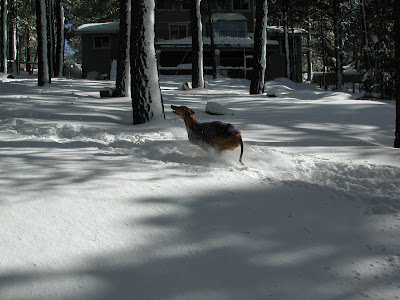 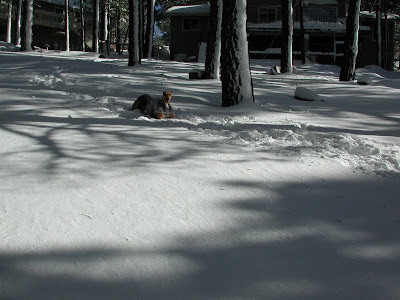 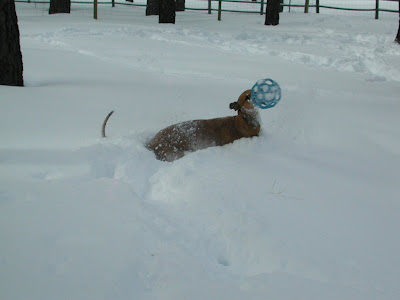 Zephyr got this fun ball for Christmas. 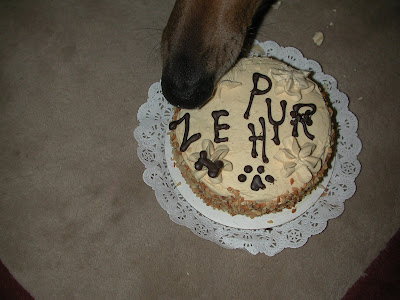 Zephyr turned 2 on January 6 and we had a little celebration! 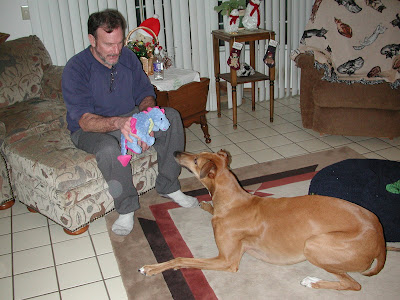 He LOVES his dragon that he got for his birthday! 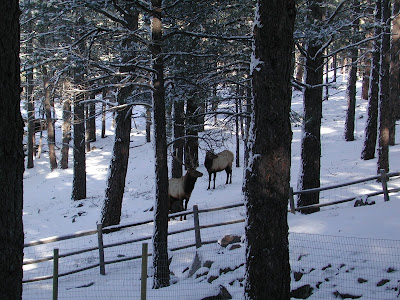 During a warm spell in January a lot of the snow melted and the elk came to visit. 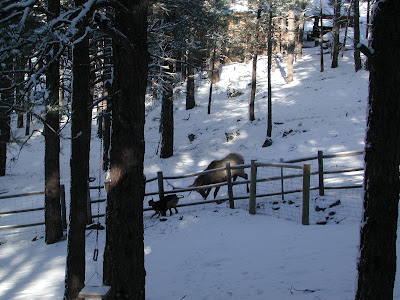 This one was a little cranking and did not appreciate Zephyr's playfulness. 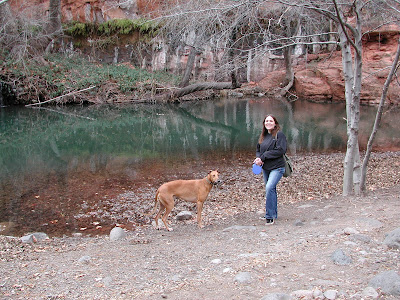 This is a hike we did with Marlies at Beaver Creek. It's a little south of us and lower in elevation so it was a lot warmer. 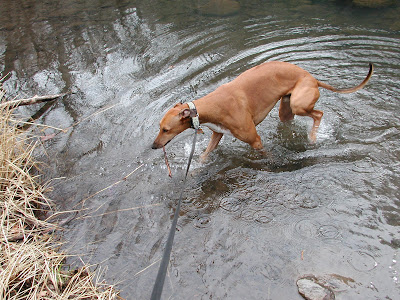 Zephyr even fetched some sticks in the water. 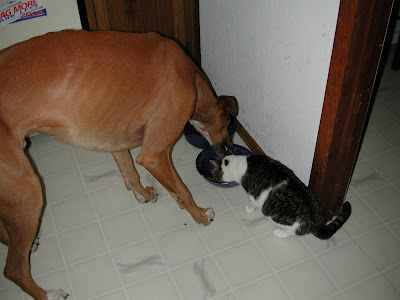 After all the fun it's good to share a fine meal with family. 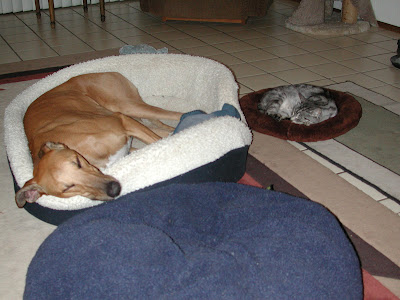 And then get a lot of rest in front of the wood burning stove! 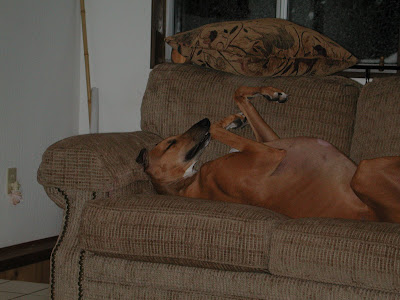 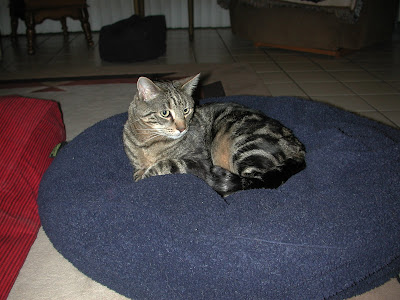 The kitties need time in front of the fire too. 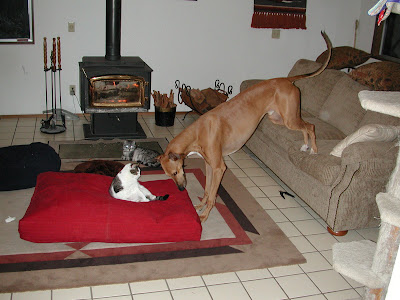 Just a reminder, it's always a good idea to be respectful and and pay homage to those who are really in charge.
Posted by Hiking Hounds at 10:34 AM 10 comments: