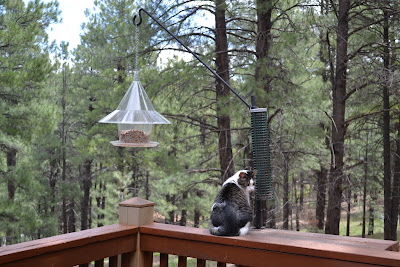 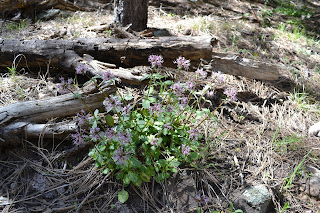 Spring is here and it's finally warming up.  Later this week the temperatures are supposed to be in the mid to upper 70's.  And, this combined with longer days has been making everyone feel a little better.  Zephyr has been doing well overall.  He hasn't had any other seizures that I know of.  The week following the seizure he did have a low fever and I could tell his energy was down.  So, he went back on antibiotics and one evening got some fluids to help kick the fever in the butt.  After about three days he was back to normal and has had no other problems.  We're (Dr. Knowles and I) not sure what caused the fever.  I was, and am, very worried that it was not an infection but something related to the autoimmune response that caused the encephalitis.  The whole thing started with him having a fever but not really showing any other signs of an infection like sneezing, discharge, etc.  It's not an exaggeration to say that at some points in the past two weeks I was in a bit of a panic.  I think some of my friends were getting ready to do an intervention.  ;-)  Again I think it's just one of those things that we won't know for sure.  It went away and I just try to be happy for that and not worry, which I'm only successful at half the time.  :-)

I work close enough to home, so I can check on Zephyr when needed.  The week after his seizure a couple times I closed the bedroom doors and put the dog beds by the couch so they would stay in there and I could leave the video camera pointed at him to see if he had a seizure.  The tape only lasts an hour, but nothing showed up.  Yes, I've thought about getting one of those pet cams.  :-)  Dr. Knowles even mentioned it and I think she was only half joking.  She even said she'd take him to work.  Actually, my principal has said it would be okay to do that because she knows how much I worry.  But, Zephyr loves kids, so I'm not sure how much rest he would get and since he's doing well now and I can check on him during the day I think home is best.

This past Friday I took Zephyr down to see Dr. Knowles and he got his third, and hopefully last, chemotherapy treatment.  She was still very positive about his recovery despite the seizure and fever issues.  I asked how things went for the other dogs she's seen with similar conditions.  She said that one did have seizures afterward and that another is a year out from treatment and doing well.  I didn't ask about bad outcomes and I still haven't asked specifically about long term prognoses for Zephyr.  I'm not sure I want to know.  I don't think knowing would change his treatment and I do know that I would possibly have one more thing to worry about.  Plus, I have a feeling there's just no way to really know an answer to that question.  She did say that he still needs to take it easy because his immune system is compromised from the chemotherapy and encephalitis, and he's still healing.  Towards the end of this week will be the low time for the white blood cells from the chemotherapy.  Last time it went well with him only being tired a few days.  Hopefully, this time will be the same.

Before Zephyr had the seizure one day I did take the boys out on a hike and I let them each go off leash, but not at the same time.  Zephyr got a little skippy, but no full on forest running.  Everyone had a great time and these are some pictures from the hike.  I'm still taking Zephyr out on walks, but with the fever thing and now a new round of chemo we're limiting the time.  This doesn't stop them from running and playing in the yard though.  :-)

This picture is not from our hike.  This is Zephyr after his last blood draw.  He got a little worked up and moved while they were sucking blood from his neck, which caused a small hematoma (pocket of blood under skin).  This has happened before a long time ago, I guess they forgot he doesn't like vampires and does better with the leg.  Zephyr was thinkin' that he looked quite fine in all his pastel patterned vet wrap.  He wanted me to take him to the dog park afterward because he thought this could work to his advantage with the girls.  Alas, the poor boy was very disappointed when we headed home.  ;-)
Posted by Hiking Hounds at 3:08 PM 6 comments:

"IT" being the encephalitis and what ever caused it.  Seriously, I want to "Go Ninja" on it, take it out like the rotten trash that it is, tell it to stay away from my boy or I'll off it!!!!  That's putting it nicely!  Zephyr is still doing well, but he had a seizure about 4:00 Saturday morning.  This is the first one he's had, that I know about, since being in the hospital and it's the first time I was with him during one of his seizures.  The others all happened at the hospital when I wasn't there or he was in the back.  I have, unfortunately, seen and dealt with very bad seizures in people before, so I know what it's like.  But, you can't call 911 for your dog that you love more than anything,  you are all they have, and I will just say that it totally sucked!  Sorry, I'm not being very positive here, but I am being honest.  All kinds of visions went through my head.  I won't go through a complete reenactment, but I bolted from bed, ran to get the diazepam, gave it to him, and the seizure stopped within some seconds.  He came around quickly, I think a minute or so, hard to remember.  The poor boy was so confused about what had happened.  After he was pretty awake I had him stand up, he was a little wobbly, etc.  Then I stood up and after some seconds... I got very sick.  A huge head rush, nausea, burning up, and I couldn't stand up without almost passing out.  Did I say how much all this sucked?  I'm trying to take care of Zephyr while trying not to pass out or get sick.  Alternating between the floor and Zephyr, who is now worried about me.  My friend who is a nurse practitioner said it was a bad case of orthostatic hypotension from going from sleeping to huge adrenaline rush to being on the floor with Zephyr and then standing up.  I'll Kick Its Ass Too!!!  Not what I want to have happen when I need to take care of Zephyr.  After about 20 minutes and going potty Zephyr settled down and jumped on my bed, laid down, and went to sleep.  He's been fine since then.  I, on the other hand, felt horrible the whole day and have gone back to lots of worrying.

I talked with Dr. Knowles that morning and she said it might be from scar tissue that has formed as his brain heals.  He hasn't shown any of the other signs of the encephalitis before or after the seizure so that's good and probably consistent with it being from scar tissue.  I've read that this can happen too.  She says that usually when they seizure from a scar they continue to have seizures.  Damn! Damn! Damn! Damn! Damn!  Argh!!  I'm kicking its ass in my head right now!

Okay, let's focus on the positive.  I know that I am extremely fortunate to still have Zephyr and that his recovery has really gone very well so far.  He is an amazing boy, maybe he won't continue to have seizures.  Dr. Knowles still thinks he will continue to progress and recover in general.  But, I still want to kick its ass!  :-)
Posted by Hiking Hounds at 10:58 PM 15 comments: 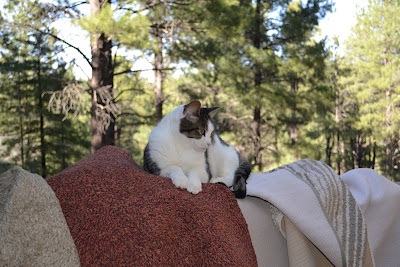 All went smoothly and Zephyr didn't have any trouble from his second chemo treatment and low white blood cell (WBC) counts this weekend.  YEE HAA!!!  :-)  He was tired for a couple days, especially Friday, but that was it, no fever, etc.  Saturday his energy was already increasing and he and Astro did a few laps and wrestle sessions  around the yard in the afternoon.  The Dr. called early Saturday with his blood test results from Friday.  The WBC was 3,600 and I think the neutrophils were 2,300 (could be wrong on that one).  For comparison, the first time he dropped to WBC of 900 and neutrophils 72, and two weeks ago he was at a normal level of 9,600 for the WBC count.  Holy crap, no wonder he got sick the with the first chemo treatment!  I think being on the prednisone and the slightly lower dose of Lomustine helped.  I decided not to take Astro lure coursing on Saturday though.  On Friday Zephyr was pretty tired and I was worried about leaving him for the day even though a friend was going to check on him.  Once Zephyr got up Saturday morning I could tell he was already feeling better.  So, later in the day I took Astro to town with me to Warner's Nursery.  It's a really nice nursery with green houses and a great pond with Koi and turtles that the dogs love to watch.


Today was our kennel clubs Conformation, Obedience, and Rally match.  A match is like an official practice with judges, etc.  I was there helping out for the day.  We always have the match at this time of year and it never fails that winter returns for the day of our match.  Although, at least this year it didn't snow or rain on us and the sun was out most of the day.  It was just windy and cold, with the wind chill it was probably in the low 40's.  Brr, when your standing there for six hours you get very cold.  Most of us didn't wear our big winter coats and regretted it.  I did bring my wool hat though.  Other than that it was a really fun day and I think everyone had a lot of fun.  A lot of people come up from Phoenix for our match because it is already too hot for shows down there.

It was a good weekend for everyone.  We are supposed to have really nice weather this week with less wind and temps. in the 70's.  Can't wait!  I'm sure the boys and I will get out on some nice walkies.