A couple weeks ago I read this post over at Tales and Tails about Christmas cards.  It's about Shutterfly's Holiday cards and an opportunity to get 25 free cards.  I'm not really a Christmas card sending type of person.  I am usually not that organized and motivated to send out cards.  But, even before I read the post I had decided that I wanted send out picture cards this year and was wondering how I would go about doing it.  I always love getting cards from my friends and family, and I really like all of the photo cards I get of friends with their furry family members.  So why shouldn't I send out one too?  I think part of the reason I wanted to send out cards this year is because it was a very hard year almost losing Zephyr.  I know there are still challenges ahead for Zephyr and me, but I am so very thankful that he is here and doing so well.


So, we are giving it a try.  :-)  Actually, one of the reasons I wanted to take Zephyr and Astro on our Sunday Trip was to try and get a picture for a card.  I think I was successful, I certainly made them pose enough, but I'm not sharing the photo yet.  :-)

Shutterfly has tons of cards to choose from.  It's going to be hard to decide on a design, but I think I want one that can have a few pictures on it.  They also have gifts and I have always wanted a picture mug so I might have to get one of those too.  For a person who has thousands of pictures and a blog full of pictures I'm a little embarrassed that I haven't done this yet.  Thanks to Tales and Tails for letting us know about this and to Shutterfly for letting us in on the promotion!

If you want to give the Shutterfly promotion a try here is the link  to register.
Posted by Hiking Hounds at 9:14 PM 10 comments: 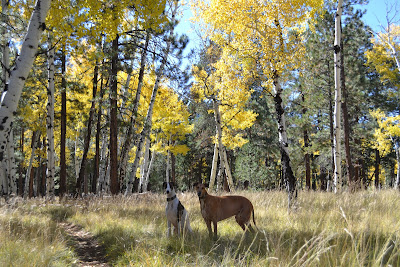 The Sunday after Astro and I hiked I took both boys back out to the fall colors.  It was a big day for Zephyr, we went on a few short walks, they posed for many pictures, and we were out for most of the day. 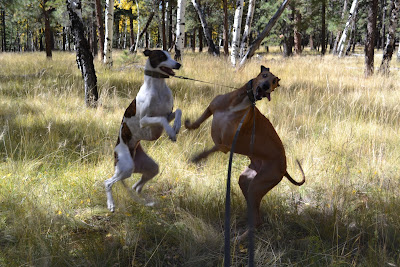 Zephyr was really happy to be out and was full of energy.  They broke out in this type of wrestling many times.  I just have to keep the leashes out of the way.  Zephyr's skin is really thin and it gets scraped, cut, and bruised easily because of his treatment.  And, it takes longer to heal, so I don't let him get too rowdy. 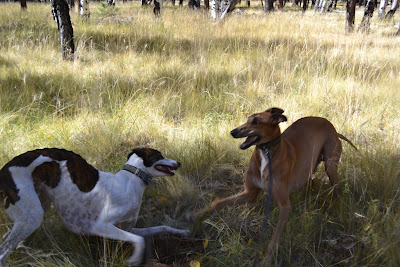 I got good news last week.  Zephyr's liver function has improved.  It's not normal yet, but he's still taking a small amount of phenobarbital.  He should be off it by Friday and that will continue to help his liver.  The neurologist also gave the okay to reduce his procarbazine (chemo med.) to every other day.  That should help his liver too.  It will also start bringing his immune system back to normal.  I just hope it doesn't also bring the encephalitis back.  His white blood cell count was a little lower which is probably due to the procarbazine.  That should improve as he goes to every other day.  She told me to take it easy with him and not over do it though.  As a result Zephyr (and all the others) has had to have fresh cooked beef added to his meals.  Poor puppy.  ;-) 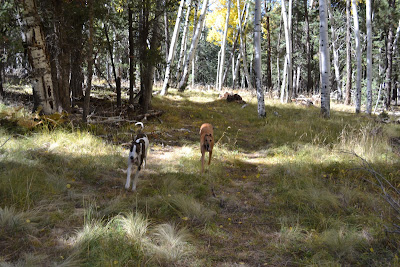 I was brave and let them both off leash at the same time and let them run.  They were really good, no crazy zooming.  I let them run into the trees in the distance and then called them back a couple times. 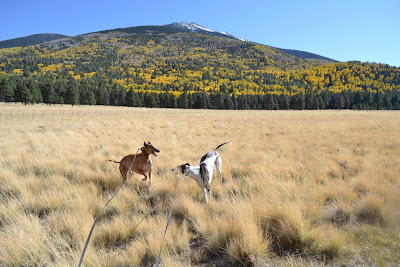 The highest peak in the back is Humphrey's Peak, the highest point in Arizona.  The high point on the Bear Jaw - Abeneau hike is below Humphrey's to the left in the canyon. 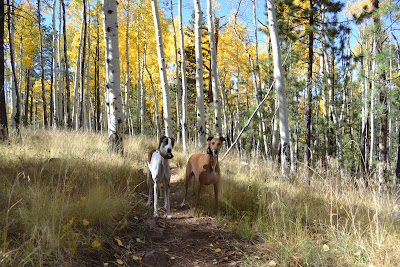 We also walked a little on the Arizona trail.  It's a trail that goes throughout Arizona. 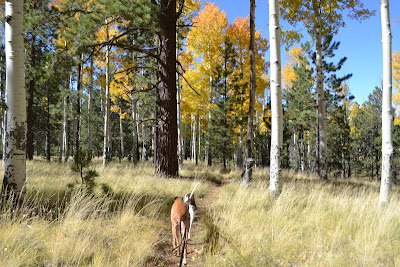 It was so nice to be out with both Zephyr and Astro for the day.  It's been so long and he was so happy.  We stayed off the popular trails and had some nice quiet walks. 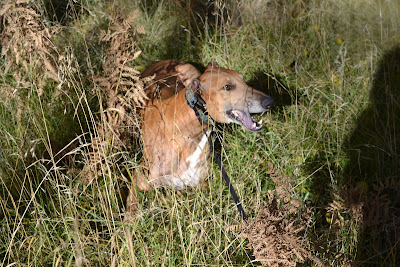 While I was trying to get timed photos Zephyr decided to lay down an roll in the grass.  Happy boy! 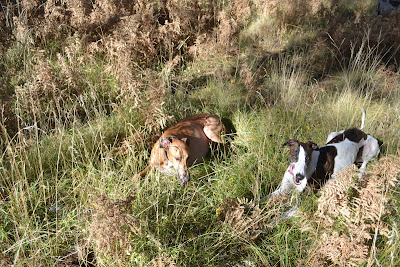 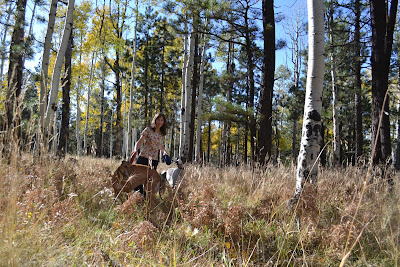 This is the best that I got for a family portrait.  I'm sure Zephyr and Astro think I'm nuts.
Posted by Hiking Hounds at 8:15 PM 16 comments:


Last Saturday Chris and I took Friday, Linus, and Astro on our second annual fall colors hike.  We went back to the Bear Jaw - Abeneau loop trail.  It was a beautiful fall day, nice and warm.

Our first break was next to this lovely rock that we managed to get all three boys to pose on at the same time.  Persistence pays off. 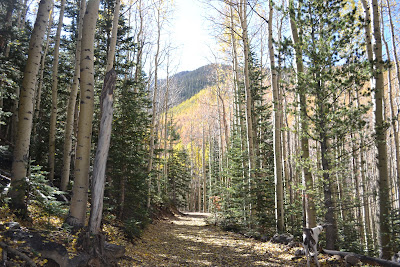 The aspens were in various stages of loosing their leaves.  Some were still green, some were bright yellow, and some had fallen off.

The boys had a great time running and playing in the snow.  We had a storm a week or so before the hike.  Most of it had melted, luckily there were some spots big enough for romping.

We took a nice break at the top of the trail.

Astro was always sniffing around on the trail, pulling me ahead, and always looking out into the forest for all the critters that he knows are there.

The trail going down Abineau Canyon is pretty steep.  The upper half was taken out by an avalanche and the trail was never officially redone so it's rough and gravely in some place.  Combine that with some packed snow and some big dogs in front of us and we were in for a tricky descent.

Another great hike with great friends!

Zephyr was so excited and happy when Astro and I got home and I felt guilty for him having to stay home, so I had to take him out for his own hike.  We went to "Off Leash Canyon" and I actually let him off leash for a little bit.  It almost seemed like he was so surprised to be off leash that he wasn't sure what to do.  He had fun checking things out and doing some short gallops though.

Poor Zephyr had to pose for pictures too.  Notice the ribs you can see?  A month ago I couldn't see them very well.  He still has a way to go, but it's so nice to be able to go out for a little hike with Zephyr again.


Zephyr and Astro are doing well.  Zephyr has started physical therapy with our friend Dr. Lisa.  He's only been three times, but so far it's going well.  Each session starts with the treadmill.  He did great getting used to it but it takes a lot of concentration.  Zephyr doesn't even want chicken treats when he's on it, too distracting.  He is in complete focus when he's treading.  It was so funny the first time he got on and realized it was moving.  He got this look on his face like "Excuse me, there is something very seriously wrong with this!"
Since it's cooled off lately, 50's and 60's, Zephyr's had much better energy.  He's been able to get out on walks a lot more often and he's been able to do many walks an hour long.  We've even added some hills, but not super steep.  His muscle tone is improving all over, especially in his rear.  Zephyr's left lower back and rear leg are weaker because he had an injury and he's right pawed.  So, a lot of his physical therapy focuses on strengthening his left rear leg to prevent it from being injured when he's being a crazy boy.

The wobble board is great because you can really target certain muscles.  Zephyr's also been on the ball.  The first time he tried the ball he actually hopped on top of it!  I told him that was very advanced, but maybe he should go slowly.  Last week he got the cold laser treatment on his rear and lower and middle back.  It seemed to really relax him.

Zephyr and Astro have been enjoying many other forms of physical therapy and stress relief.  They love to tear paper.  Sometimes Zephyr will help himself to the recycling bin and rip into some good paper.  Or, I'll find the milk container in the bedroom.

The transition to Keppra and off phenobarbital is going well.  As far as I know there have been no other partial seizures.  It's a slow process and we still have about two weeks until he's totally off.  Tomorrow is the first day of 22.5mg, he was at 60mg.  Hopefully I'll be able to reduce the procarbazine in the next week or so.  I think it could have been reduced earlier but I didn't want to change two medicines at once.

Astro's been doing great and we have actually been doing a lot of training which I'll try to post soon.  He is really progressing in agility.  I closed the channel weaves a week or so ago and now I'm working on removing the guides.  We have a beautiful fall hike in the aspen trees planned with friends for this weekend.

I've been going to our local Sunday Farmers Market and getting the boys beef marrow bones from a local ranch.  They love them!  It's become a Sunday tradition.

Recently we did a taste test of kibbles.  Astro's first choice was Taste of the Wild High Prairie (bison).  They had been eating EVO chicken and turkey, but I don't think they really loved it, especially Astro.  I was also wanting to decrease Zephyr's calorie intake.  Astro would not touch the Taste of the Wild Wetlands (duck).  I once bought some raw duck for Zephyr and he had the same reaction.  Astro's second choice was Blue Diamond Fish and Sweet potato, and his third choice was Blue Diamond Wilderness.

Zephyr started with the High Prairie, then went to the Wetlands (which was funny because it had the duck), then went back to the High Prairie.  Zephyr ended up eating them all because, you know, when you're taking prednisone and phenobarbital, you could starve at any moment.  So, I went with the Taste of the Wild High Prairie.  Of course they still get some fresh cooked meet and EVO canned beef.  I'm pretty sure my animals eat better than I do.
Posted by Hiking Hounds at 10:23 PM 13 comments: