The last two weeks we were out of town on a big camping and hiking trip! We went all the way up to Sandpoint, Idaho (where Ernie's mom and brother's family lives) for our nephew Lucas's and Hallie's wedding. Sandpoint, Idaho is in very northern Idaho, almost to Canada, and is a beautiful area. We like to go on a trip every summer and decided to turn this in to our camping vacation so we could bring Zephyr with us. Zephyr had been camping once before, but not such a long trip. He has always been a great car rider and loves being outdoors, so we had a great trip. Prepare yourselves, this is a long post. 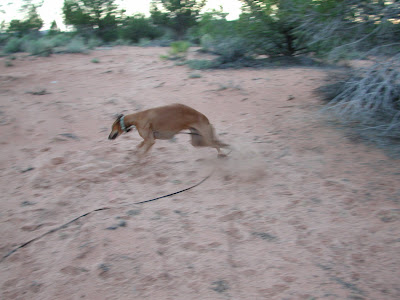 Our first night was spent at Coral Pink Sand Dunes, outside of Kanab, Utah. Zephyr thought the sand was great! 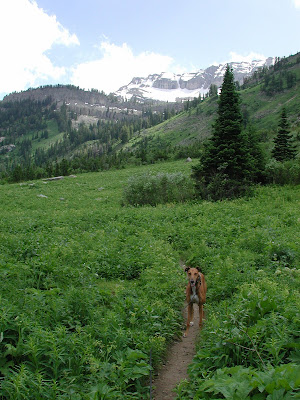 My favorite hike was on the west side of the Grand Tetons. Dogs aren't allowed in the national park, but this canyon was just as nice. 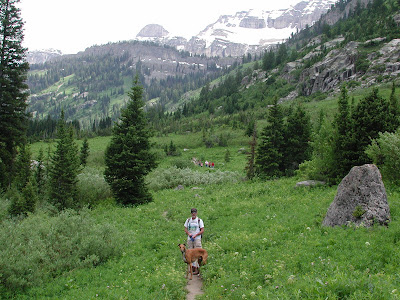 As we hiked into the canyon more of the peaks became visible. 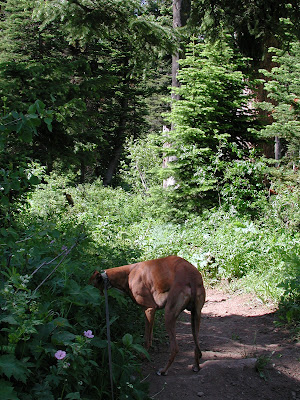 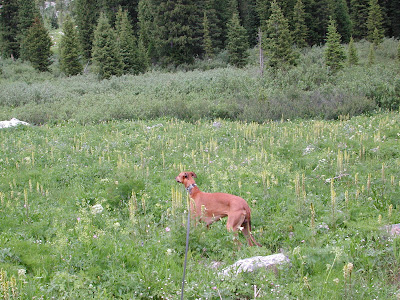 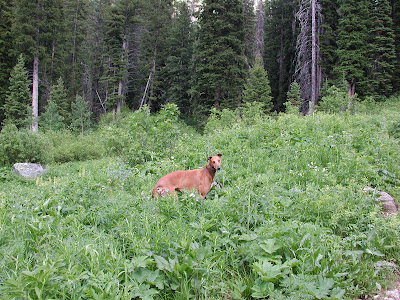 Sometimes a dog just likes taking in the scenery. 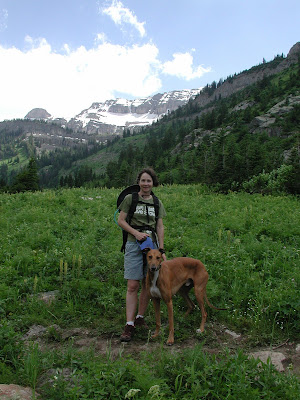 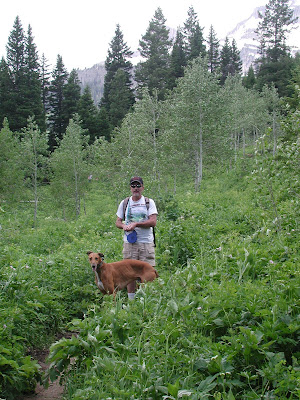 A good time was had by all.


We did get chased out of two camping spots and into hotels by swarms of mosquitoes. Once was along the river near Star Valley, Idaho and second was at North Fork, Idaho (which we realized had happened to us there a few years ag0). Zephyr didn't seem to be bothered by the bites, and of course he's on heart worm meds, but even after a few minutes he ended up looking like he had the chicken pocks which made us feel really bad, and they were driving us nuts too so we retreated. The other camping spots only had a few mosquitoes, but they still really liked Zephyr. So we came up with a few ways to protect him. 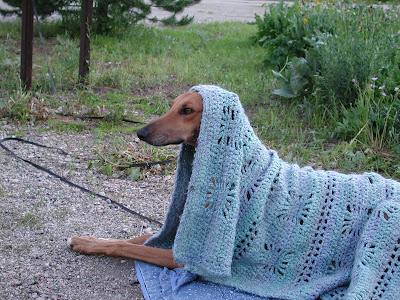 Most creative was the very regal afghan. People in the campground really enjoyed this. 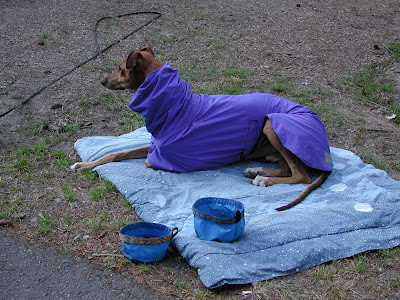 Most successful was Zephyr's raincoat. 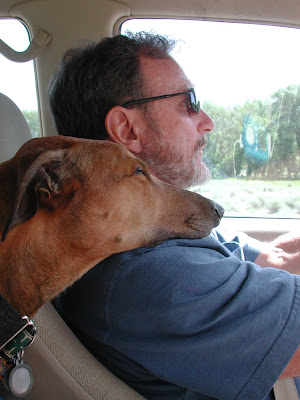 Dog is definitely his Co-Pilot! How cute is that! 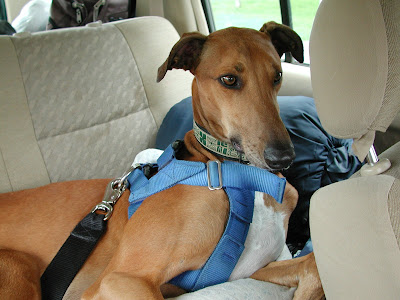 Zephyr had the whole back seat of the Pathfinder to himself. Plus, it was extra comfy with our sleeping bags and pillows, and his blanket and afghan. 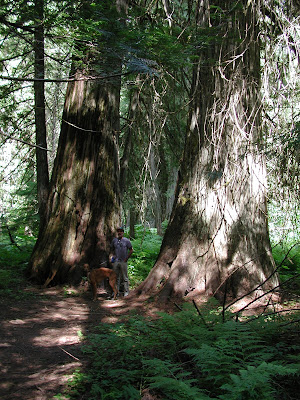 In very western Montana there is a small canyon that has some really cool giant cedar trees, a lot like the redwoods. They seemed to be preserved here because of the cool flat valley they were in. 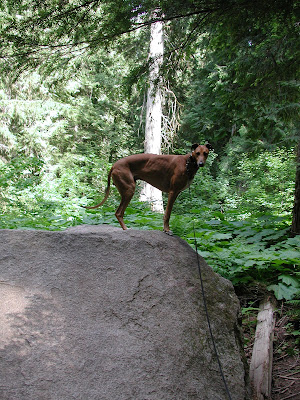 I'm King of the World! Or so he thinks. There were also giant boulders just for dogs to climb on.


We had originally planned on staying in a hotel in Sandpoint, rather than with Ernie's mom Elizabeth, because we were really worried that Zephyr would be too rowdy and we didn't want him to run in to her. We stayed the first night in a hotel and then took him to the local dog park the next morning where he really played it up. Then off too Oma's (Elizabeth is from Switzerland, it means grandmother) it was for a first meeting. True to the calm greyhound personality Zephyr was perfect and we canceled that hotel room! Zephyr loved his Oma and she loved him! 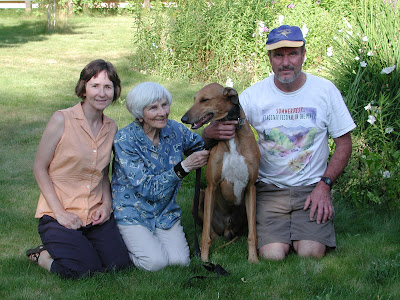 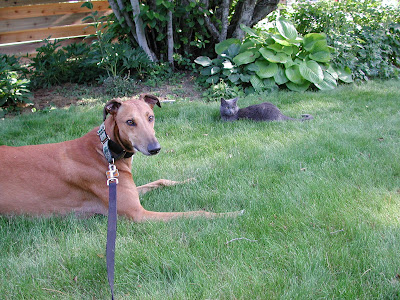 He had lots of fun with Zoey, she actually loves dogs. 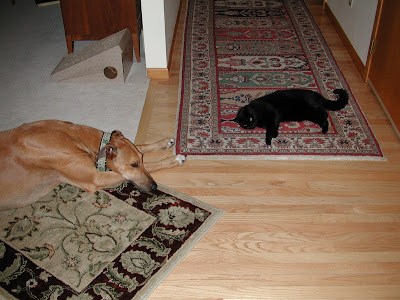 And, he hung out with Percy. Zoey and Percy like dogs because the grew up with Ernie's parents German Shepard, Shasta. Shasta has passed away and the kitties love it when dogs come to visit.


The wedding took place on a beautiful rock overlooking a canyon and with mountain views. A small group of people made the drive. I don't have pictures of the wedding, but this is a picture of everyone trying to help Hallie's aunt and uncle's car after we took a wrong turn and tried to go up a steep gravely road. All turned out well. Apparently the wedding party watched all of this and had a good laugh from the top of the rock. 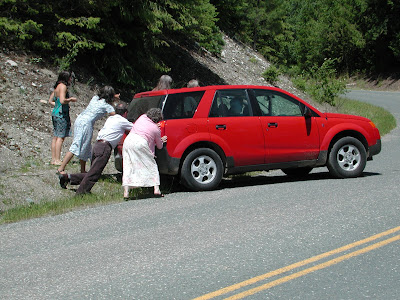 The reception was back at Hallie's parents place. No pictures, but it was beautiful. We wish Lucas and Hallie all the best. 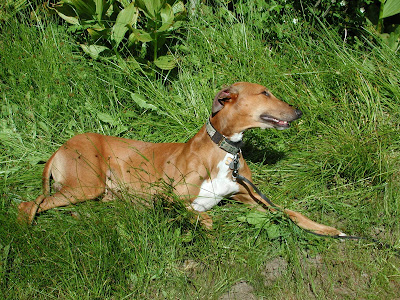 The trip home was a little more direct, but we still had nice camping and hiking. 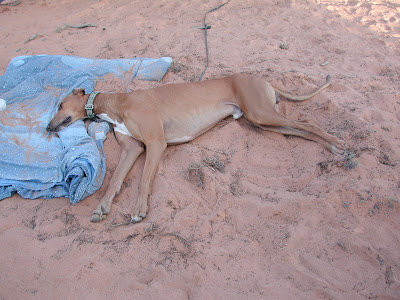 The last night was back at Coral Pink Sand Dunes. This is one tired and very dirty dog. He got a bath when we got home!
Posted by Hiking Hounds at 1:18 PM 4 comments: