I was tagged by Never Say Never Greyhounds to post the sixth picture in my sixth folder of my photo folders, explain the photo, and then tag six other people to do the same. My picture is of Telluride "Telly". Telly is no longer with us, we lost him on December 21st, 2006. He was 19 1/2 years old and a truly wonderful boy. This is not the best picture of him, he's kind of in a funny position, but it wast taken about 6 months before died from cancer and kidney failure. Actually, we lost our 21 1/2 year old girl Ashley (see picture below Telly) three days later on the 24 making for a really crappy Christmas that year. Both of them passed peacefully with us at home which was really nice. If you'd like to read more about them check out Ashley and Telly. 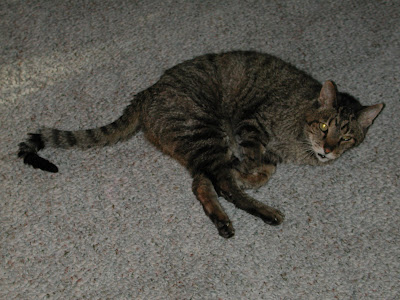 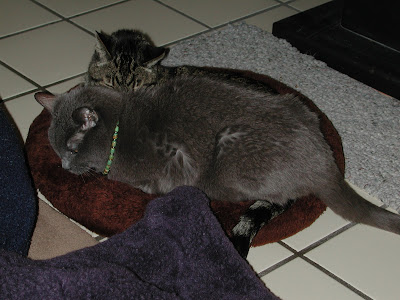 Ashley and Telly getting warm in front of the wood burning stove. She was wearing her beads so they must have been on a date. ;)

We still have three other kitties and I've been meaning to introduce them so hopefully that will happen now. They are not happy that it has taken so long. We got Zephyr a few months after Ashley and Telly left us. I had wanted a greyhound for at least 15 years. But, as I went through college, got married, got a job, etc. Ashley and Telly were getting older and I didn't think it would be fair to bring a dog into their lives then.
I will Tag these blogs: