Astro is three years old today.  A few days ago I asked him what he wanted for his birthday and he said grilled ribs.  I said our grill was broken, I can't make you ribs.  That's when he looked at me with sad puppy dog eyes.

What's a mom to do but go buy a new gas grill.  I'm not a big griller, but I do like to put some salmon on occasionally and it would be nice to grill when company comes.  Last year at Crickets B-Day party the boys were each given a grilled rib as a party favor.  They were to die for, and Zephyr and Astro have never forgotten them!   I didn't have any idea about what grill to get, I just wanted a small inexpensive one.  I checked around town, there's not a big selection here, and decided on the Char-Broil Patio Bistro.  It gets good reviews and it was on sale at HomCo.

I had never grilled ribs before, I'm close to being a vegetarian.  It was an experience with lots of smoke and sizzling.  Honestly, not really my thing, but anything for the dogs.  After 45 minutes they seemed done.

I laid out the table cloths and showed Astro and Zephyr the finished product.  Astro was so excited, he could barely contain himself.

Dessert was sweet watermelon.  It's hard to believe that Astro is already three years old.   Then I think of everything he's done in his three years and I'm so surprised.  He's a special boy.  I love how he loves to "work" with me and he's so smart and goofy.  He's also very sensitive.  When Zephyr was sick he was definitely a cheer leader and care giver for both of us.  This weekend Astro and I are in our second agility trial.  I'll be bringing a rib for him to have after runs.  It should be super fun for the birthday boy. 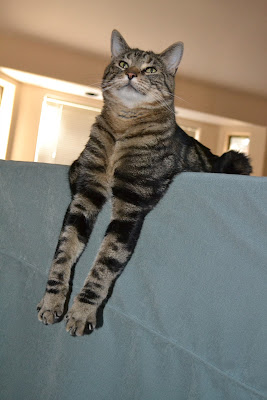 Two weeks ago Astro and I were in our first agility trial.  It was a two day NADAC (North American Dog Agility Council) trial in Williams, AZ.  Just 45 minutes from home.  Astro did really well and I was super proud of him!  On Sunday we got our first Q (qualifying run) and 1st place on our second Regular class run.  We had our goofy zoomies and Astro was often handler impaired, but we pulled it together and had some really nice runs.  These pictures are from different runs on Saturday and Sunday.

I was really happy with Astro's focus in the new location with all the distractions.  Our first run was Tunnelers and was pretty funny.  I got confused after calling him off a wrong tunnel (calling him off it was awesome though).  When I turned we headed in the wrong way and I had to get him back and in the right direction.  Great that he was coming back and not totally taking off.  We did well getting back on track.  Then he was goofy, said Hi to the judge, and another missed tunnel or two.  But, he was generally staying with me and we finished happy.

Then we had a long wait to the end of the day for Regular class.  His first run was nuts.  He visited a jump setter and then got the zoomies big time.  I got him back and held him for a few seconds and the judge was nice enough to let us keep going.  I stood there holding him for what seemed forever wondering if I dared let go of this dog again.  :-)  I started him in front of the weaves and he got them, yay!  He did better but was still so fast and goofy he missed some things.

On the second Regular run of Saturday we did a lot better.  The first picture is us just starting out and I held my hand up trying to keep him focused for his contact (at least one foot must touch the yellow area when coming off the dogwalk or A-frame).  He did great and we just had one off course when I didn't give good directions and he missed a hoop.  When I called him back he went the wrong direction through the hoop.  He was really running fast and happy.  The judge gave us a nice comment after the day about how he improved and did well except for our one bobble.  For the rest of the weekend we didn't have any zoomies, he got all of his contacts, and we got all of the tunnel dogwalk/A-frame discriminations.  There was some luck in there, but I was thrilled.

I love this series of shots of him in the weaves.  The look in his eyes is so determined and he's so happy.  All of these pictures were taken by a nice couple at the trial and they emailed them to me.  I was so grateful.  I had never seen pictures of him doing agility before.  I have some video too and his tail is wagging away.
This picture is awesome!  I love his eyes and he's pretty much in the air.

I also have to say that it was such a joy to have nice soft cool green grass under our feet!  Astro enjoyed rolling around in it all weekend and I spent a lot of time with bare feet sticking my toes into the grass.  :-)


Our first run on Sunday was Regular class and went well.  I made some mistakes and we ended up off course, but Astro did really well.  I learned so much from the trial.  It's amazing that the smallest unintended motion with my hand, foot, etc., will send Astro in the wrong direction.  It made me much more aware of my handling and where I need to improve.  I also need to trust Astro more.  Once he was ahead of me taking jumps and hoops on a curve.  I panicked thinking I had lost him, but he was following the course.  I think If I would have front crossed the curve he would have come right over and not missed the last hoop.  On Sunday he went ahead of me to a hoop and we needed to make a left turn to a tunnel.  I rear crossed before the hoop, called "switch", and he made the turn and to the tunnel.  I was really happy with the front and rear crosses we made during the weekend.

We Q'd (qualified) on our second Regular run on Sunday.  It was a great run and I was really excited and proud of Astro.  He ran fast, smooth, happy, and with me the whole run.  I actually didn't realize that we had probably Q'd until a little later.  Our only mistake was after Astro entered the weaves he popped out.  I just brought him back and he went through fine that time.  It was a hard weave entrance with a rear cross before a jump for a left turn to the weaves.  I think I was in a funny position, or maybe Astro's body was after the entrance, and that caused him to pop out.  I didn't know that in Novice you can redo the weaves and still qualify.  Wow!  And, he got 1st place in that run.


Our Touch-N-Go run after Regular on Sunday was nice, with just one off course because my arm accidentally moved out after the A-frame contact sending him to the wrong hoop.  Originally I hadn't entered Regular class for Sunday.  But after I saw how he improved so much being able to run twice with only a short break in between on Saturday, I decided to enter Regular on Sunday.  Good thing we did, but it made the day long.  We had two Jumpers runs at the end of the day Sunday.  They went well, but were both exhausted by then so I think it was hard for both us to run and think.

Yep, I got a picture with our judge, Ken Perlmutter, for or first agility Q.  Astro did such a great job and I'm so happy he enjoyed the trial!
Posted by Hiking Hounds at 10:57 PM 14 comments: 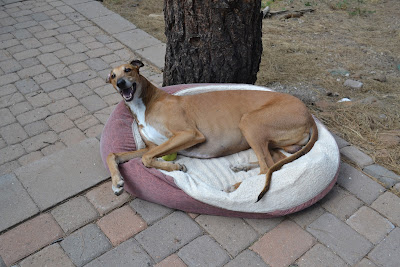 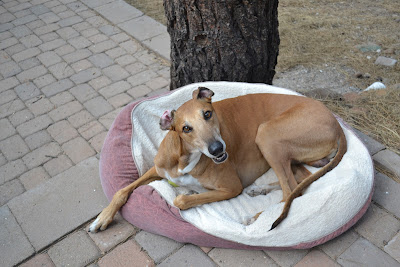 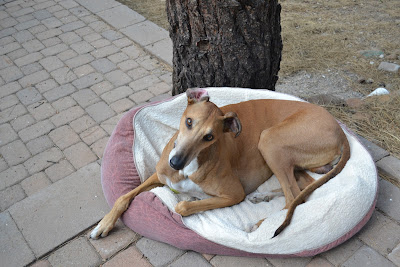 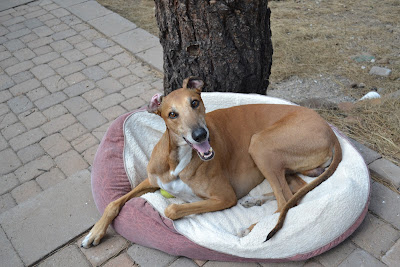 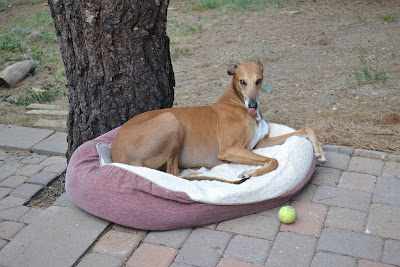 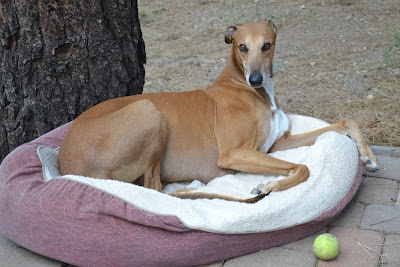 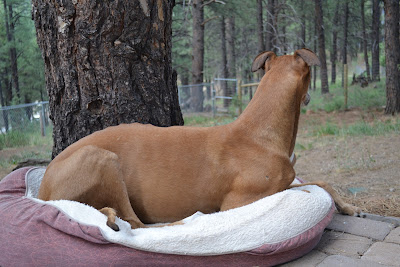 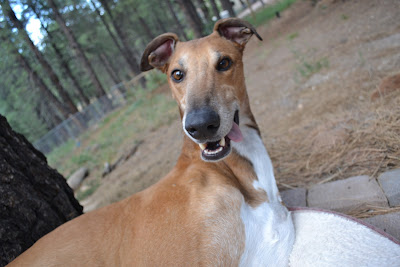