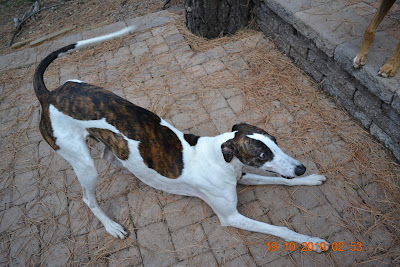 I just found this old post that I forgot to publish.  It's from last year.  The pictures are pretty cute, so I thought I would post them anyway. 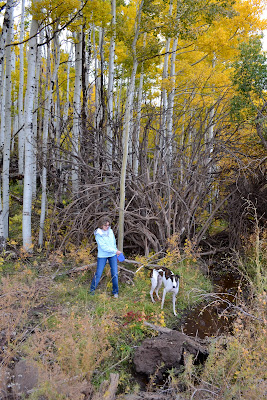 With our friend Elaine. 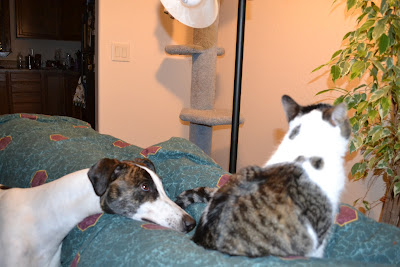 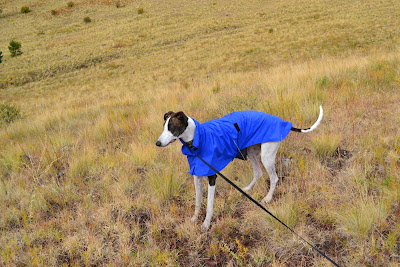 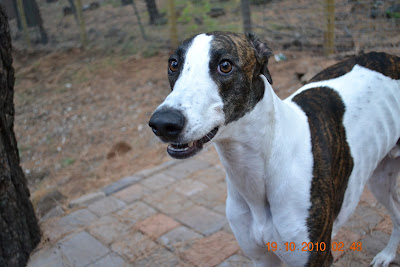 Astro has such a sweet face with the best expressions.  All I have to do is look at him and raise my eyebrows a few times, wink, smile, or turn my head and it will really get him going and being goofy.


On November 17 I took some deep breaths, unhooked the leash, and let Zephyr run free in the forest with Astro.

Then I had to remind myself to keep breathing.  :-)


This was the first time the boys had really run together and explored the forest since March when Zephyr became sick with encephalitis.  Of course they've run and played in the yard, etc., and there was a very short run on our fall outing.

Running in the open forest with your brother can inspire all kinds of acts of greatness.  Because of this I wanted to wait until Zephyr had built up some muscle tone to reduce the risk of him getting hurt while twisting and flying through the forest like all good dogs do.

I'm very happy to report that no big injuries have occurred.  Only some cuts and scrapes from forest debris, one kind of big on the front of his back foot.  I was worried about two things, that something would happen to trigger the encephalitis to come back (I will always worrying about that) or he would run or twist too hard and hurt himself.  Zephyr has done a great job.  Sometimes Astro will try to get him going after he's kind of tired, but Zephyr's been really good about listening to his body not overdoing it.

Zephyr is so happy to be able to roam the forest again.  He's gone out about six times now.  It's great to watch him rediscover his forest freedom and to see him so happy.  The first time I let him go it took him a few minutes to fully understand that he could really go.  He kind of galloped around smelling things and looking around before he and Astro really ran.  Sometimes he just stops and looks out and around through the forest.  He really smells around things a lot.  And, he's discovered a new forest delicacy.  Elk Poop.  That's right, I used to be one of those lucky people who's dog was not so interested in elk poop.  Zephyr would like me to remind you that although he is doing extremely well, he is still taking prednisone and is at risk of starvation at any moment, therefore he has expanded his taste palate to include some of the finer things in life.

Astro is also very happy to have his forest partner back.  The two of them work their way around to all the good things in the forest.


I have some other good news.  Zephyr's liver function is much better.  Two of the values, ALT and AST, are in the normal range.  This is great because these are the two that really indicate that the liver cells are damaged and dying.  His ALP is still high, in the 800s, but down from the 1,300s.  Apparently since he is taking prednisone this is typical and not as bad as having the other two elevated.

Dr. Knowles also gave the okay to continue reducing his medicines.  So, after tomorrow's dose of procarbazine (chemo med.) he will start taking it only twice a week, down from every other day.  He'll continue on this schedule until the middle of January and then he'll be done with it.  And, in two weeks I'll start reducing his prednisone to 5mg once a day, down from twice a day.  This will be in small increments, 1.25mg at time, and over about four weeks. All of this will continue to help his liver function too.  I'm so happy to be reducing his medicines!   But, I have to admit that it also makes me nervous that the encephalitis will come back.  Hopefully everything will go smoothly.

We've also had our first snow, it was actually in early November.  The boys were so excited to go out in the morning and find snow on the ground.

I love watching them first step out on the deck, realize there is snow, and then get all spunky sticking their nose in the snow and pouncing around on it.

And then of course have a good run in the snow.  We are supposed to get more snow late this week so there will be a lot more running and playing to be done.  Apparently happy greyhounds running free also inspires poetry.  ;-)
Posted by Hiking Hounds at 1:11 PM 18 comments:


Hi everyone, this is Zephyr!  Ya that's right it's me, and I am doing really well and wanted to tell you all about it.  I'm still going for physical therapy once a week.  Going to physical therapy is kind of like going to a spa where they treat you like a king.  It's all about you.  Look how nice and relaxing the decor is.  I feel like I'm taking a walk in the forest when I'm on the treadmill.  And look close at those pictures above the treadmill.

That's right, it's yours truly! There to inspire all the recovering animals with my awesome athleticism and the joy of running free.  I think this will really get them treading along.  Those are pictures of me during my very first lure coursing run when I was just a babe at 18 months old.  Notice the picture of Mom laying down?  After my run I didn't want to stop.  I only came back and stopped running when I thought she was being attacked by a crazy lady.  I'm a good boy like that.  The other picture is of my friends, family, and me on an excellent hike in the mountains.  We are all powering up the trail.  Btw, my friends Friday and Linus also have a photo display to inspire everyone.

I have really been getting in shape, loosing my extra weight and building muscle.  Mom says that I am in even better shape now than in these photos.


I'm really working on my core strength.  I do lots of things with balance that use all my little muscles.

I'm a natural on the pods.  These really help me use all my muscles from my toes and up through my whole body.  When I'm on the equipment Dr. Lisa gently rocks me from side to side to really use my muscles.  Oh, and do you want to know the other reason it's really like being at a spa?  They feed you really good food the whole time!

Also, each session ends with a laser treatment that is like having a relaxing and energizing healing massage.  Mmmm, Mom is so jealous.
Posted by Hiking Hounds at 11:35 AM 12 comments: 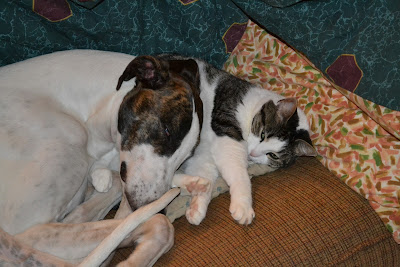 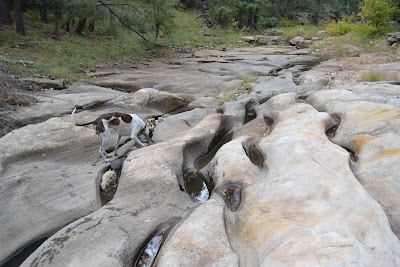 These are flutes in the Coconino Sandstone in our Off Leash Canyon.  They make great water holes for the dogs to get a drink from.  These pics are from a hike Astro and I went on in October. 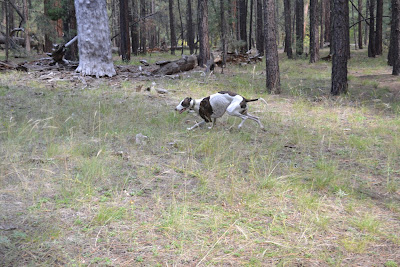 Astro was ready to go! 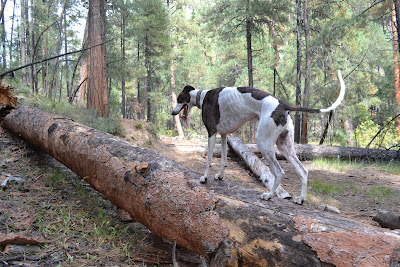 This tree fell sometime during the summer and makes for a grand new log walk.  So you all know, Astro eats as much as he would like.  He's just in his skinny teenage stage, please don't report me to the authorities.  ;-) 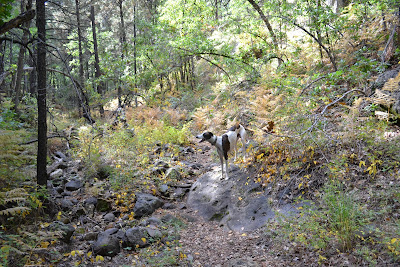 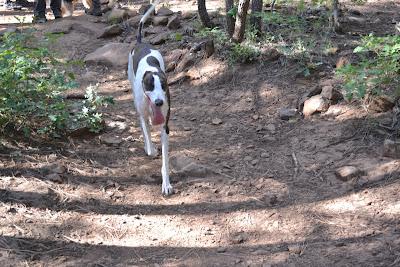 Astro and I went on a hike with our Pack Dog group late this summer and I'm just now posting the pictures.  Oops.  I still haven't had Astro do much hiking with a pack, so this was an unpack hike for him.  All the other dogs were so jealous.  ;-) 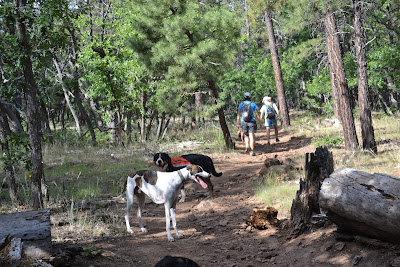 Our hike was on Labor Day weekend and took us up part of Mormon Mountain.  Astro actually stayed on leash for most of the hike, but he did get to go free for a while in the middle and he had a great time.  For some reason people always seem to stop and watch our group as we go by, I can't imagine why.  ;-) 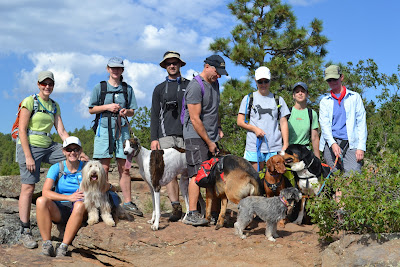 You can see our group has quite an assortment of dogs that go along.  Kenda, the Bearded Collie on the left, actually got a long skinny stick/splinter under skin on her leg sometime that weekend.  It wasn't discovered until about a week later though when she started limping.  Her mom thought it was a muscle problem and found it while giving her a massage.  Luckily that's the most serious injury any of the dogs have ever had on our hikes. 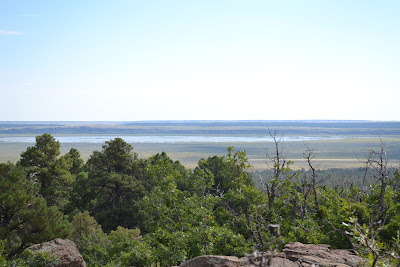 This is the grand view out towards Mormon Lake.  This is all covered in snow now.  Oh, how we wish it was still summer.

Pablo in a Box 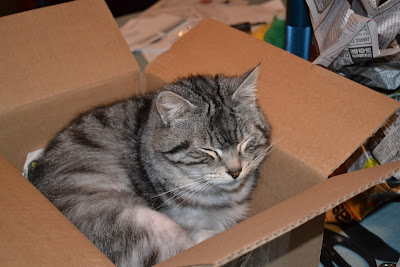