I'm finally posting some pictures from hikes that Astro and I went on in the San Fransisco Peaks a few weeks ago.  School has started so I'm back to work again and falling behind in everything else.  Our first hike was up Sunset trail, which has a great view of the main part of the Peaks at the top.  When we got back down we went to Schultz Tank and Astro got to play in the water and get nice and muddy like he loves.

When we hike on these trails I keep the dogs on leash most of the time because there can be a lot of people on the trail and wildlife that they would love to chase.  Last fall on this trail two deer came running down the side of the canyon and jumped on to the trail about 20 feet in front of Zephyr and Astro.  Luckily the boys were so startled it gave me a second to lock the Flexi's and lean back before they started to go after the deer.  I still can't believe I stayed upright.

But, I do take the leashes off for the sake of good pictures.  :-)  This is one of my favorite trails because it's higher up in the mountains and the forest is a lot more lush and diverse.  There are all kinds of little critters and new smells to investigate.

We have a hike planned this weekend with our packdog friends.  I haven't really had Astro wear the pack much though, so he won't be carrying a full load.  Astro is doing really well in his Agility training and we are taking a Rally class now too.  I need to try and have someone take pictures of us during class.

Astro and I have fun on the hikes and I think he likes the alone time with Mom, and I like it too.  But, it is a little lonely and sad to not have Zephyr with us. Zephyr is doing well though and I'll give an update on him soon. 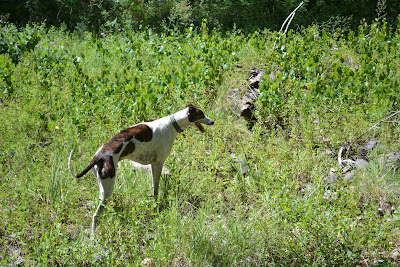 Beautiful Start Line Stay.  Notice how focused he is on his handler who is doing a Lead Out. 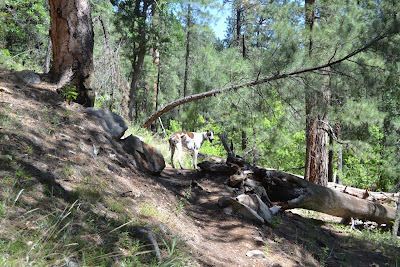 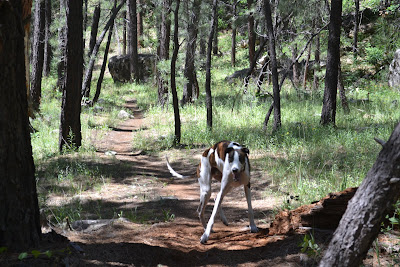 Tight right turn after a Pinwheel of jumps. 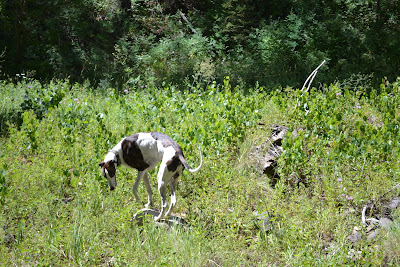 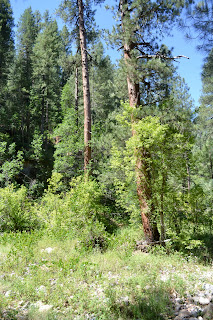 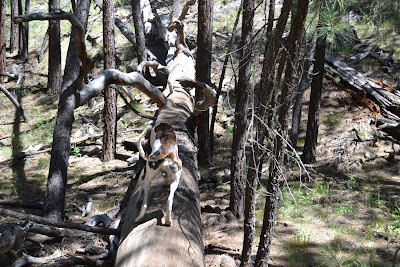 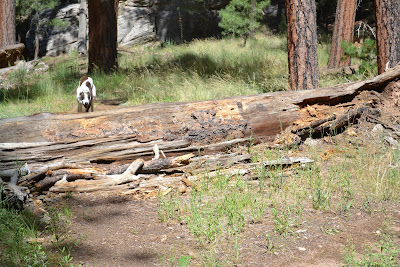 Ready for the Triple Jump. 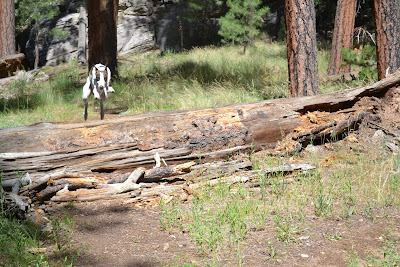 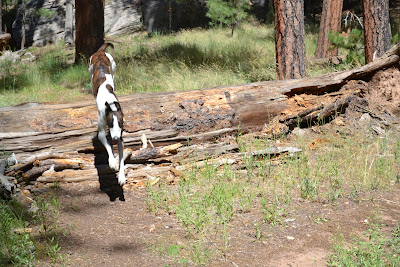 No bars knocked there! 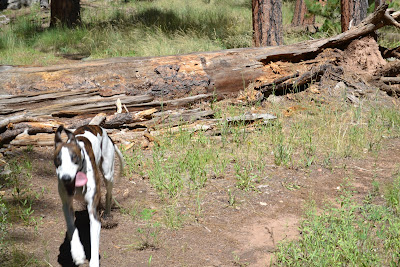 And he crosses the finish line a happy boy.  Of course he got a qualifying score.  This boy will have his MFACH in no time!

I gave Zephyr a bath today.  I have to admit this was his first real bath since right after he got sick.  I don't usually bathe them too often, a few times a year, and a rinse in between if they get real muddy.  I noticed that he had a bit of an odor awhile ago, but then we got busy dealing with seizures, the follow up with the neurologist, and more chemo, and then too much time had past.  I also wanted to wait until he was past the low part of this last chemo treatment so as to not get him soaking wet when he was not feeling well and susceptible to infection, etc.

Anyway, this odor Zephyr had was not the normal dirty dog smell.  It had some of those components :-) , but there was definitely something else.  I think it was a smell from the chemotherapy and maybe everything his body has been through.  I had heard that people undergoing chemo can have a different smell.  It's hard to describe, but it was kind of a mediciney, chemically, metalliccy, musty, definitely not normal smell.  And, I have to say I kind of feel like a jerk for not washing him sooner.

Zephyr was great during the bath.  We just go in the tub and shut the door.  I give them treats during baths so even though it's not their favorite thing both of them will step in to the tub on their own.  His fur has thinned from the chemo and it's not in as good of condition.  I think for dogs chemo doesn't make the fur fall out, but when it naturally falls out, or is shaved, it grows back in very slowly.  This makes since given shaved areas from March aren't fully grown in yet.  I've also noticed that he has gotten more white fur on his muzzle.  It will be interesting to see if the funny smell comes back after the shampoo smell wears off.  Zephyr washed up super fine though.  His fur is shinier and really soft and smooth.  Even better for cuddling.
Posted by Hiking Hounds at 3:29 PM 8 comments: 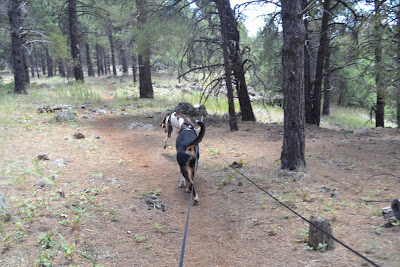 A few weeks ago Chris and I took Linus and Astro out to the Lily Pond for some water play after an agility practice.  The boys were ready to go as it was a warm day. 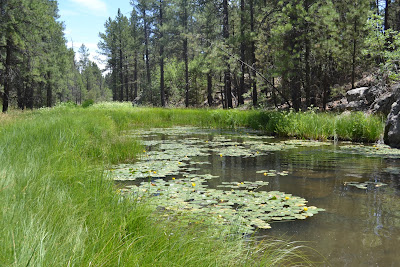 The "Lily Pond" is actually called Dow Spring and I think the lilies were originally brought in a very long time ago, maybe by the Dow family that originally settled there.  I've been visiting here since I was a kid and the lilies have always been there.  This is the view looking down the canyon. 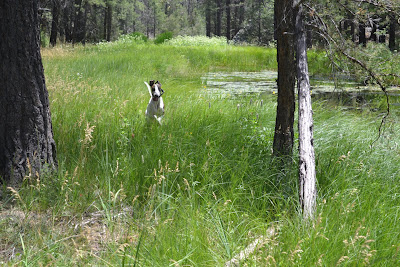 Astro says "Yipee!!!  I get to run and bounce in super tall green grass!!!"  I love the way his ears are bouncing up and he is smiling in this picture. 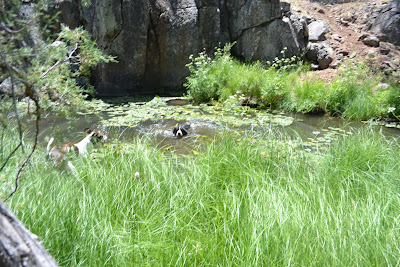 Linus took his first swim in May.  Here, he just decided to go in for a dip on his own.  I wish Astro would have followed him. 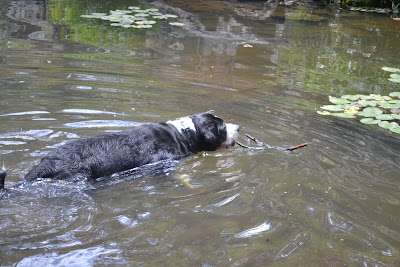 Linus goes after the stick.  What a good boy!  Astro would also get the stick when it was a little closer to shore. 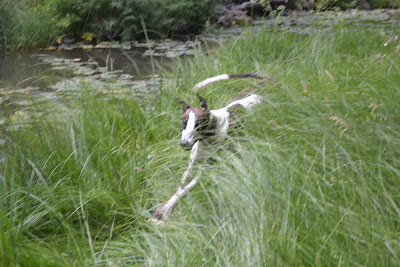 Astro spent a lot of time flying through the grass and spinning around. 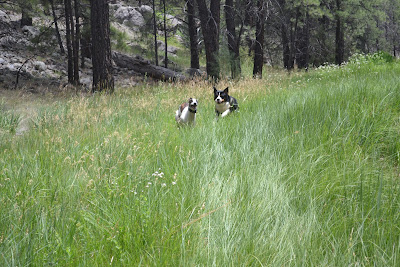 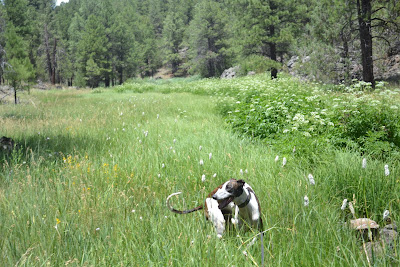 The beautiful view looking up the canyon.  Of course, with a happy greyhound in it, the view is much better!