Tonight Zephyr and Astro started their agility classes. Once the snow melts and the weather gets warmer our club, Sky High Jumpers, starts offering classes. Astro is taking his first class and this is the first agility class Zephyr has had in I think a year. Astro did well for his first class, but he did give Kerry (one of our instructors) a bloody lip when he jumped up. Not good. :-( Astro seems to have reached the age (9months) at which he behaves like an unruly beast. It's like he's so overcome with happiness there's no stopping it. I remember when Zephyr went through this stage and it was at the exact same age. He was enthusiastic though and had lots of fun.

Zephyr did great, even though he did decide to run around with his best friend Friday a few times. They were the only ones in the class tonight. Otherwise I was really impressed! He really hasn't done much agility so we haven't gotten down a lot of things like making contacts, etc. But he was able to sequence 4 obstacles many times with out running off for a case of the zoomies at the end. He also did a great job with the weave poles. Twice he went through all 12 with them being about 6 inches or less apart. That's the closest he's done, and it was great to see him doing the foot work and watching his rear wiggle through.

So, over all it was a success and we can't wait for class next week.
Posted by Hiking Hounds at 9:55 PM 1 comment: 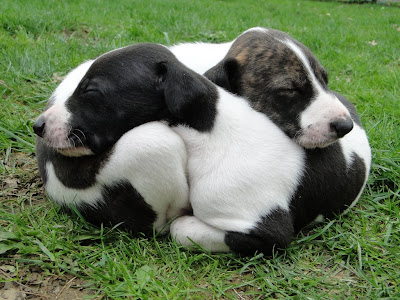 I just had to share this. I think it's the cutest bundle of greyhound puppy love I've seen. These two cuties are from a litter of Dani Edgerton's, Cebar Greyhounds, who Zephyr and Astro are from. MMMMMMMM, Yummy!
Posted by Hiking Hounds at 9:31 AM 5 comments: